This is the third in a series of excerpts from white papers I am posting due to the gracious generosity of Katie Iorio-Martin in response to the enthusiastic requests for more information by many of her interview readers.  For more information go to www.dalecarnegiewayphilly.com.

95% of workers who feel positive emotions are fully or partially engaged in their enterprise  according to recent research from MSW Research.

The flip side of that statistic is that 90% of workers that don’t feel positive emotions are not fully engaged in their enterprise.  Do you see the importance of keeping the workforce positive?  Learn the emotional drivers of employee engagement!

Humans like to say they make rational decisions, but in reality they are
driven by emotions, which people post-rationalize when explaining their
choices to others. This after-the-fact storytelling has led management to
attribute a series of functional reasons why only one-third of employees
are fully engaged at work and why others become disengaged and
leave their organization. Strategies for recruitment and keeping workers
engaged have in the past focused on practical rewards such as pay
increases, bonuses or flexible working hours, but it is the feeling-based
personal relationships that have the greatest influence, causing engaged
employees to work effectively, stay with their company and act as
ambassadors for their organization.

Dale Carnegie Training invited MSW Research to investigate the
emotions of the workplace. MSW utilized its EMO*Dynamics battery,
twenty-eight positive and negative emotions proved to be important
in consumer decision-making across many categories. In this
groundbreaking nationwide study of 1500 employees, they discovered
that five of these twenty-eight emotions drove engagement and twelve
provoked disengagement.

THE POWER OF POSITIVE EMOTIONS

Experiments have shown that people are more likely to help others when feeling positive emotions. Smiling not only makes us feel better but is infectious; we can store up positive feelings to protect us from negativity and help us through difficult times. This holds as true in our working life as it does in personal life.

Analysis shows that feeling valued, confident, inspired, enthused and empowered are the key emotions that lead to engagement. Being “valued” is the gateway to achievement. Forty-six percent of employees report feeling valued. However, by itself feeling valued does not generate engagement; rather it acts as an enabler for the other more positive emotions. Feeling valued and feeling confident together empower people to make decisions about their work and generates enthusiasm, which inspires people to try harder. Employees who are excited and enthusiastic to be at work are not just there for the paycheck or the next promotion they care about the organization and work to further its goals.

The emotional responses to questions an employees ask themselves about their organization,

These questions are crucial to their level of engagement, affecting their performance at work and their willingness to learn within the organization. Employees want to be a part of something bigger than themselves, something they can be proud of. Feeling pride in their work energizes employees. They look forward to going to work and are more willing to put in extra effort to make the organization a success. In short, they are engaged.

The level of engagement increases dramatically with the number of key positive emotions (Inspired, Enthusiastic, Empowered, Confident or Valued) employees feel. Seventy percent of all employees surveyed felt at least one of these five key positive emotions, but only 12%
felt three of them. Among this latter group only 5% were disengaged, while more than half were positively engaged in driving the company forward. Engagement is more than being happy at work; in fact happiness does not greatly impact engagement. Rather, engagement is demonstrated by how personally connected and committed workers feel to their organization. It is measurable by an employee’s willingness to recommend their organization as a place to work and a place to do business. 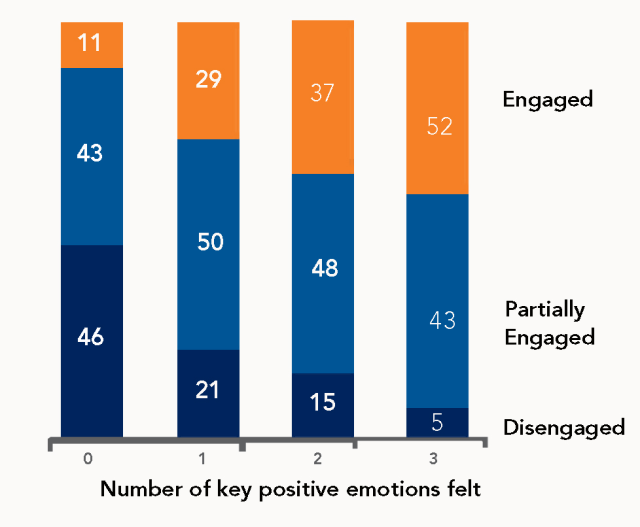 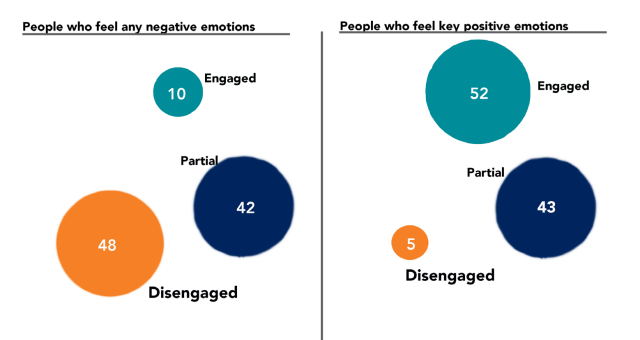 Nearly half of these workers are disengaged and only 10% engaged, contrasting starkly
with the 52% engagement measured among those who felt most positive as a result of
their interaction with their supervisor. 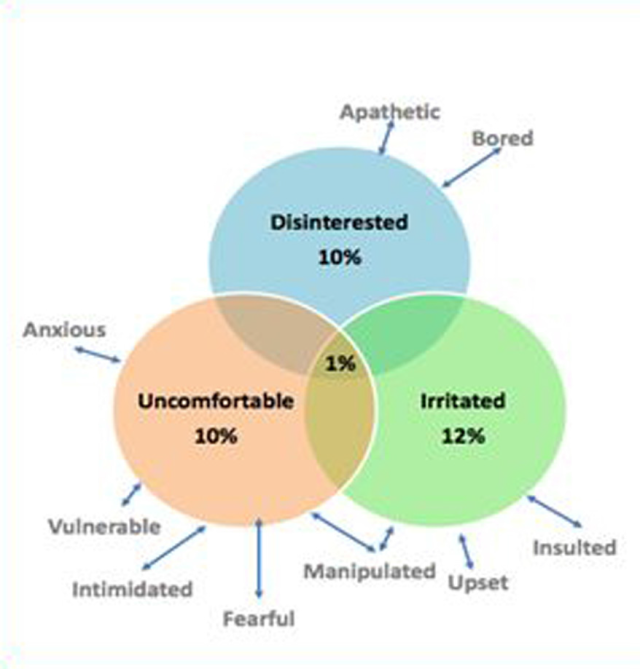 This is important because negative emotions are more contagious than positive ones.
Because they are more noticeable, they can spiral from the individual employee to impact
co-workers and the organization as a whole and spread beyond the workplace to clients,
potential clients and possible future hires.

What drives those emotions?

Developing Positive Emotions in Your Organization

Employees personalize their work through emotions felt about the company’s actions as a whole and about their immediate supervisor in particular. Those who emotionally connect in a positive way with an organization feel a sense of ownership and are more likely to stay with it, delivering superior work in less time and reducing turnover costs. Dale Carnegie Training can help your organization build effective interpersonal skills that augment the positive emotions essential to a productive work environment and that lead to increased employee engagement.

In his life, Brian Lucas has been a coach, farm worker, forester, health care advocate, life guard, general contractor, mechanic, mixologist, musician/singer (in a rock group), salesman and teacher. Brian has worked as a project manager, technical marketer, methodologist, manager, software architect, systems designer, data modeler, business analyst, systems programmer, software developer and creative writer. These efforts include over a hundred hi-tech initiatives in almost every business and industrial sector as well as government and military projects. Among them, he designed and developed a quality assurance system for the first transatlantic fiber optic communications network, a manufacturing system for a large computer manufacture’s seven manufacturing centers, a data mining system for steel production, an instrumentation system for cable systems, defined requirements for government’s information systems and designed and developed human performance management systems. Brian has educated and mentored many over the years, designing programs to discover and develop talent. He has also lectured extensively to a variety of audiences. Brian is currently devoting as much time as possible to the innovation of business agility and human capital management along with the next generation of agile software development. As an amateur theoretical physicist he is working on joining general relativity and quantum mechanics through a multidimensional time corollary on string theory and negating the uncertainty principle with Louis de Broglie’s wave/particle hypothesis. He is also an avid blue-water sailor and wilderness backpacker. He enjoys billiards, boxing, chess, cooking, famous battle reenactments and war gaming, fencing, flying, gardening, horseback riding, martial arts (particularly Ninjutsu), philosophy and psychology, playing musical instruments (7 so far), poker, rapid-fire target shooting, reading (he tries to read a new book every night), painting with oils, scuba diving, skiing and recently writing novels.
View all posts by Brian Lucas →
This entry was posted in Agile and Strategic Planning, Agile Arguments, Agile for Beginners, Agile in the Enterprise and tagged Agile, Agile Adoption, Agile Thinking, Business Agility, Business Management, CEO, Dale Carnegie, Employee Satisfaction, HCM, Keeping Agile, Organization. Bookmark the permalink.

1 Response to Excerpts from: EMOTIONAL DRIVERS OF EMPLOYEE ENGAGEMENT