The one is for Brad – conversationalist, satirist, humorist, historian, logician, craftsman, military strategist, but most important of all – my friend!

“Once you have something so deeply infused in your culture and your brand, it would be very difficult to reverse that inertia if you wanted to.” – Andrew Mason 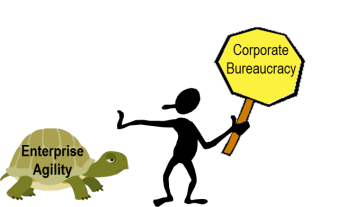 Despite agile’s wide popularity across all business sectors and organization sizes, companies today still struggle with organization agility. A 2012 report in the Economist claims that organizations are reporting they are less agile today. 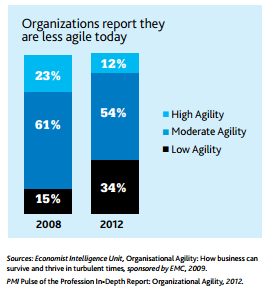 What is going on here? Are we actually loosing ground with being agile? Why are the deltas so great and in the negative?

The study in the Economist Intelligence Unit points to the quality of a company’s change management effort as the key to their success in organization agility.

Admittedly, the statistics have an impressive correlation. However, it is easy to misinterpret the meaning of this report.

First, we should realize that organizations had a more in depth and sophisticated understanding of what organization agility was in 2012 than was previously known in 2008. If you doubt that just look at the amount of change in technology and new business structures that have emerged since 2012. With this stricter standard, business are rightly judging themselves more harshly as they realize the importance of being agile in more than just name.

Second, the definition of change management has fundamentally changed. Previously, change management had a philosophy of controlling and inhibiting change. This added to the inertia of many organisations by creating bureaucracy and unnecessary and complicated procedures. Today, change management is proactive in encouraging change and seeking out new opportunities that the business can leverage. That is one of agile’s key principles. Ultimately, I believe organizations are considerably more agile today than they were in 2008. If they weren’t they would be out of business in this challenging and changing economy.

So, I encourage all my friends and readers to redouble your efforts at Keeping Agile!

In his life, Brian Lucas has been a coach, farm worker, forester, health care advocate, life guard, general contractor, mechanic, mixologist, musician/singer (in a rock group), salesman and teacher. Brian has worked as a project manager, technical marketer, methodologist, manager, software architect, systems designer, data modeler, business analyst, systems programmer, software developer and creative writer. These efforts include over a hundred hi-tech initiatives in almost every business and industrial sector as well as government and military projects. Among them, he designed and developed a quality assurance system for the first transatlantic fiber optic communications network, a manufacturing system for a large computer manufacture’s seven manufacturing centers, a data mining system for steel production, an instrumentation system for cable systems, defined requirements for government’s information systems and designed and developed human performance management systems. Brian has educated and mentored many over the years, designing programs to discover and develop talent. He has also lectured extensively to a variety of audiences. Brian is currently devoting as much time as possible to the innovation of business agility and human capital management along with the next generation of agile software development. As an amateur theoretical physicist he is working on joining general relativity and quantum mechanics through a multidimensional time corollary on string theory and negating the uncertainty principle with Louis de Broglie’s wave/particle hypothesis. He is also an avid blue-water sailor and wilderness backpacker. He enjoys billiards, boxing, chess, cooking, famous battle reenactments and war gaming, fencing, flying, gardening, horseback riding, martial arts (particularly Ninjutsu), philosophy and psychology, playing musical instruments (7 so far), poker, rapid-fire target shooting, reading (he tries to read a new book every night), painting with oils, scuba diving, skiing and recently writing novels.
View all posts by Brian Lucas →
This entry was posted in Agile and Strategic Planning, Agile Arguments, Agile in the Enterprise, Agile Thinking, Uncategorized and tagged Agile, Agile Adoption, Agile Thinking, Agility, Business Agility, Business Management, Innovation, Keeping Agile. Bookmark the permalink.